EA summarizes everything announced during today's Behind The Sims Summit Stream Event. This includes the news that The Sims 4 is now free-to-play, as promised. The Windows edition is available from Electronic Arts or Steam and word is the macOS edition is on Origin. As for the future, anyone worried the steady stream of DLC for the game will now dry up, have no fear. We're told more content is "being developed into the foreseeable future," and two expansions will arrive next year. And looking beyond, word is the next-generation Sims game, codenamed Project Rene, is also currently in the works. Here's the summary:

The development team at Maxis also emphasized its dedication to develop new and meaningful The Sims 4 experiences for the foreseeable future. Players can expect more packs, kits, free updates, and Sims Delivery Express drops. The studio offered a glimpse at concept designs for two future expansion packs coming out next year – and shared that infants will be arriving in early 2023.

As a thank you to players for their support, celebration rewards are available across The Sims 4, The Sims FreePlay and The Sims Mobile including a variety of tattoos to adorn your Sims and a special Plumbob Ceiling Fan - all free, and already available in the games.

Maxis gave fans a glimpse of the very early stages of the next generation The Sims game and creative platform, with a working title of Project Rene. The title “Project Rene” was chosen to be reminiscent of words like renewal, renaissance and rebirth to represent the developer’s renewed commitment for The Sims’ bright future.

Crash Bandicoot has crashed the PC party, as Crash Bandicoot 4: It's About Time is now available for Windows on Steam. Here's the release trailer in the decidedly not PC-centric "shorts" format. Here's word:

Neo Cortex and N. Tropy are back at it again and launching an all-out assault on not just this universe, but the entire multiverse! Crash and Coco are here to save the day by reuniting the four Quantum Masks and bending the rules of reality.

Who you gonna call? Illfonic! That's because Illfonic announces the release of Ghostbusters: Spirits Unleashed, a new 4v1 multiplayer game based on the slime-filled world of poltergeist control. It's available for PC on the Epic Games Store as well as for Xbox and PlayStation. Here's a new trailer where Raymond Stantz and Winston Zeddemore introduce the concept, which follows:

In Ghostbusters: Spirits Unleashed, Ray and Winston open the Firehouse to you and the next generation of Ghostbusters. This asymmetrical game of hide and seek, is a 4v1 setup where players will either play as part of a team of new Ghostbusters or a singular Ghost. This title not only allows players to enjoy the game solo or with up to four friends, but will also have an online and offline single-player mode available in the form of AI assisted play. Most importantly the more you play a story will unravel (with cutscenes.) Whether hunting or haunting, the game is easy to learn and fun to master!

Ghostbusters: Spirits Unleashed has all the iconic gear and gadgets, from Proton Packs to PKE Meters and Ghost Traps, that fans would expect and new gamers to the universe will enjoy when playing as a Ghostbuster. In addition, many will recognize the Firehouse and Ray’s Occult Books that act as the game’s hub. This is where players will choose missions, customize their characters, practice firing their particle throwers, and explore all there is to learn. And yes, you will hear the original film actors reprising their roles as Ray Stantz and Winston Zeddemore, along with some new friends!

Blizzard News has a new PC Launch Trailer for Call of Duty: Modern Warfare II along with system specs and preload details for the military shooter sequel. Preloads for Campaign Early Access begin tomorrow at 1:00 pm EDT, and Early Access will go live 24 hour later. Preloads for the October 27th official launch will begin on October 26th. Finally, there are complete PC system specifications, which follow: 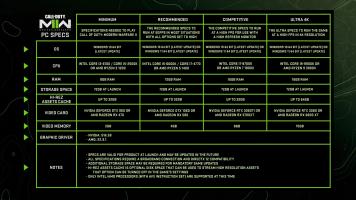 What is Gotham Knights? is a new trailer answering burning questions about this upcoming action/RPG based on DC Comics. Word is: "The time has come to rise up and protect Gotham City. Choose between Nightwing, Batgirl, Robin, and Red Hood as you take up the mantle of the Dark Knight and forge your own path to Knighthood." Also, a new tweet outline minimum and recommended system specs. These are:

This tweet announces a showcase on Thursday to show off the future of the Resident Evil series:

Paradox Interactive and Iceflake Studios announce Shattered Hope is coming to Steam on November 3rd, bringing more content to Surviving the Aftermath, the post-apocalyptic strategy game. The announcement we received calls this an expansion, while this post on Steam calls it DLC. The distinction is blurry at best, anyway, so we won't sweat it. Here's an Announcement Teaser with a look at some concept art, because video. As everyone knows, nothing complements an apocalypse like a calamity, so that's what's in store for players who choose to let this shatter their hopes:

During the apocalypse, the Moon was destroyed and now the consequences of that are showering down from the sky in an unforeseen disaster. By gathering resources from Moon Rock deposits and coming together as a people, the survivors must find hope to proceed and prosper. Shattered Hope focuses on increasing resource production in the colony while attempting to keep up Hope for the colonists - otherwise, the new Anguish condition can cause trouble for them and the entire colony.

Lucy Dreaming is now available on Steam, offering a simultaneously cute and nightmarish point-and-click adventure for Windows, Linux, and macOS (thanks Indie Retro News). This Official Release Trailer shows off this paradoxical vibe along with some gameplay. There's also a playable demo, but this does not include Linux support. Word is: "Lucy Dreaming is a pixel-art point & click comedy featuring the voice of Dominic Armato (Monkey Island's own Guybrush Threepwood) and a special appearance from German YouTuber and Kickstarter backer Gronkh." There's also a quote from Monkey Island co-creator Ron Gilbert saying, "I'll be playing it on day one." Here's more on what to expect:

Discover a dark family secret and rid a young girl of her nightmares in this splendidly British point & click comedy adventure. Playing as sharp-witted Lucy, explore both dreams and reality to meet all the colourful characters who'll help you solve puzzles, gather clues and find a murderer.

Ride your bike around the small British town of Figgington to meet its sardonic residents. Use your map to explore every corner, from its run-down town centre to the local pub as you discover the town's deepest, darkest secrets.

Continuing the above theme, Early Access to Amberial Dreams for Windows is now available on Steam. This precision platformer is the fifth installment in a series that began in the days before Flash turned out to be a flash in the pan. The Early Access Launch Trailer takes a look at gameplay, and here we have some details:

Amberial Dreams is an evolving 2D physics-based precision platformer in which players control a sphere and its speed through an enchanting and oneiric universe filled with wonders and wicked levels. The game both offer outstanding difficulty through wicked levels and accessible gameplay to let players experience the game at their own pace. With the use of mod.io, Amberial Dreams features one of the most powerful level editors in the platforming genre. Players will also be able to customize every level they have beaten in the campaign or create their own before sharing them with the community.

Amberial Dreams tells the story of Amber as she wakes up from her long slumber, alone, to find her former idyllic world transformed to the core. Players will incarnate her avatar and will explore 4 different biomes, each with their own gameplay twists and narrative. As they progress through the story and levels, players will uncover hidden secrets which will change the world.

*Blue's News may receive a commission on sales of this item.

When we brought MrsBlue's car in for inspection yesterday, we pointed out that one of her tires needed refilling twice recently. It turned up quite low a few weeks ago, and then ended up being low again just a couple of weeks after. Sure enough, the tire in question had a nail in it. The good news is this was between the tread, which was an easy repair, as opposed to, say, the sidewall, which will usually require a tire replacement. Glad this was all taken care of without the puncture ending up leaving anyone stranded by the side of the road.

Roadworthy Round-up
Thanks Ant and Neutronbeam.

About That Ad Blocker

We see you're using an ad blocker. While we strive to make our ads behave, we understand your desire for peace and privacy. So please consider becoming a supporter to take advantage of the no ads version of Blue's News. This will help sustain our efforts to bring you the best in gaming and tech news without requiring you to see ads or suffer a guilty conscience. You'll even get a nifty forum badge that will be the envy of the neighborhood!

Copyright © 1996-2023 Stephen Heaslip. All rights reserved.
All trademarks are properties of their respective owners.