Back to the Main Logo Archive

All of the graphics that adorned the top of this website before the current one were not technically logos, but mastheads, since they couldn't be accurately portrayed in a simple two-color format, which is one of a logo's defining points. Here is a brief bit of history of all the older mastheads we could dig up:

Jul 29, 1996: Created by Thom "Devicer" Greenwald. Our first real graphical masthead, this is obviously big in terms of both screensize and bandwidth even by current standards, even though higher resolutions and broadband connectivity are far more common than when this was on the site. Nonethless, this was very in keeping with the style of the times. Interestingly, the title on this masthead shows prescience, as it was for the news page, but this was not yet the name of the site, which was "blue's Quake Rag," at the time (lowercase "b," and all). In fact, Thom also was the one who coined the phase "All the carnage that's fit to post," with due apologies, of course, to the New York Times.

Sep 22, 1996: This ultra-simple, but still-striking image was a gift from John "Choryoth" Guthrie, who has since gone on to a successful career in gaming as a professional (as one of the original creators of Half-Life, among other things), but at the time was one of the creators of a website called "Quake Command" and some of the earliest Quake mods for which the site was home. John is the person most responsible for helping focus on the design philosophy that has been continued on this site since then, and he probably does not himself know how instrumental his input was in helping develop the philosophy of Blue's News as we now know it.

Nov 20, 1996: Created by ColdSun, C.O. of the Rangers Clan, this masthead continued the philosophy of being simple and fast to load.

Dec 24, 1996: The first of our mastheads created by Walter "2" Costinak, this is the first rendition of our now familiar "guy reading the paper motif." The guy in this case, of course, being the Quake Marine.

Dec 30, 1997: This masthead, again by Walter "2" Costinak, was intended to get away from a character from a specific game, so Walter took a bit of artistic license, and created a semi-likeness of me (or me if I were in the WWF, and not a scrawny webmaster). Not able to completely be game-independent just yet, Walter also placed that Quake II tattoo on that beefy bicep. This was by far our longest running masthead, as it (or, on occasion, one of its variants shown here) ran atop the site until December 10, 2000... almost three full years.

Dec 14, 1998: We received holiday variations on some of the older mastheads, but they seem to be lost in the old bit bucket. As opposed to some of the others like the Halloween version above where readers added their own holiday cheer to Walter's artwork, this one was done by Walter himself.

Apr 1, 1999: This was sent along by a reader nicknamed Anyware a couple of months before it was used, not intended to be an April Fool's masthead. I liked it so much in that role that I used it two years in a row.

I cannot figure out exactly when the Unreal masthead went online, except that it was right around the time of the game's release. A bit of funny history behind this is that Epic's Mark Rein contacted Walter about doing an Unreal logo, offering to pay him, while likewise offering to pay us to use it. I told Mark all he had to do was pay Walter to make the logo and I would post it for free, happy that Walter would finally get some return for his work on the site which, in the early days, had been voluntary. Shortly after the logo went up, I received a check for $1,000 from Mark, who obviously disregarded what I said.

In the older framed design, there was usually a "throbber" graphic in the top of the left menu frame. We eventually added variants to stop the distracting animations, if so desired. Another problem that historically plagued these throbbers was many browsers at that time (especially under Linux) seemed to display a bug that caused CPU loads to soar when displaying even tiny animated .gifs.

Fall/Summer 1996: Created by Griffin, the spinning "Q" logo was our first "throbber," which was probably our ultimate example of style over substance, as it was probably usually a bigger download than the rest of the site... quite appropriately, at one point it was a contemporary of the giant skull masthead.

Oct 9, 1996: Created by Brian at Fluxx Design, the spinning paper throbber was not long-lived, as many readers complained about the distraction it caused when it was in the menu frame that was constantly on screen. 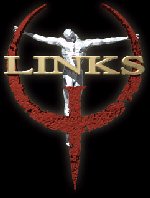 Jul 29, 1996: The links page logo was also the work of Thom "Devicer" Greenwald, and was used along with his skull masthead.

Dec 30, 1997: The page header that went along with the Quake II tattoo masthead, this was also created by Walter.

Copyright © 1996-2023 Stephen Heaslip. All rights reserved.
All trademarks are properties of their respective owners.