Last weekend I had to say goodbye to one of the best friends I've ever had, as Hudson the wonder dog finally succumbed to a heart that was not as physically strong as all the love it contained. This has me engulfed in grief, but such occasions call for recalling happier times, which will help. Let me tell you a little about my girl.

She was as tenderhearted with people as you could possibly imagine. Her breeder had foster kids, and she loved all children and babies, and it was cute to see her get so excited when she saw youngsters playing. As for adults, she was partial to men, and enlisted countless male friends and family into her legion of special boyfriends to lavish attention on her when they visited, but she had some very special relationships with women too. She was one of those dogs that made all her friends feel like they shared a special connection, which they did. As "her human," she and I were completely bonded. She wasn't cuddly, but I would sometimes mush with her a bit, and was occasionally rewarded with a quiet contented grunting noise I called her "piggie sound." I'll particularly miss those moments. 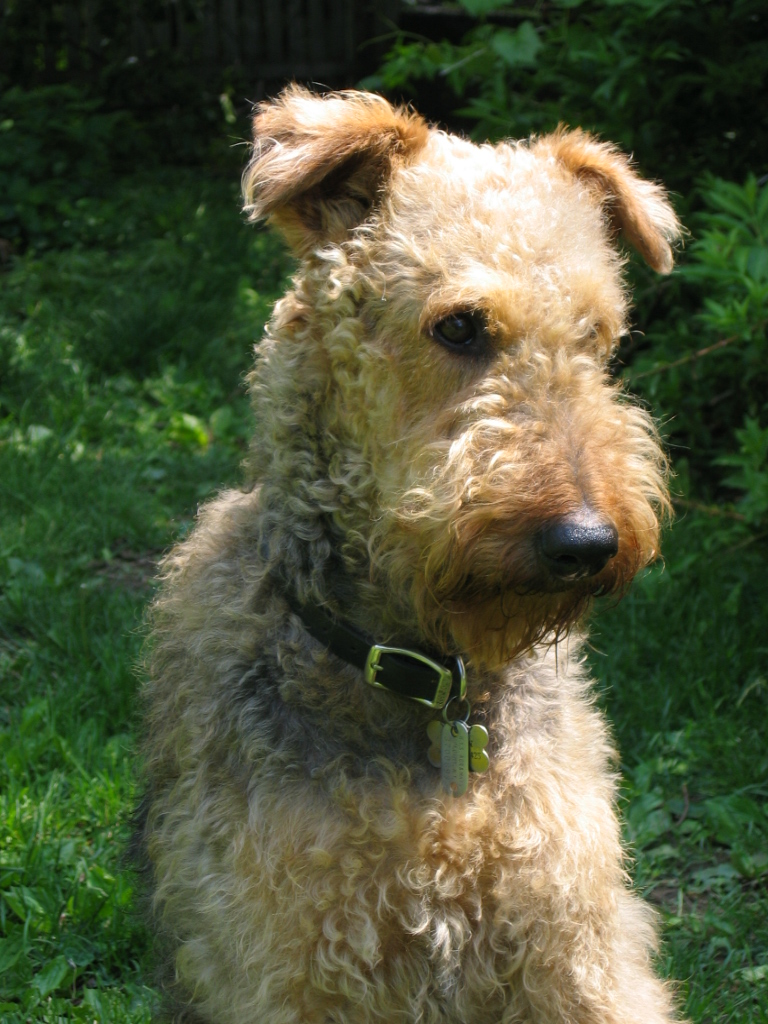 Perhaps her most memorable trait after her tenderness was her skill at escaping, and I often joked she was the Houdini of the canine world. We had an older picket fence when we moved in, and she quickly learned she could break through portions of it if she tried hard enough, which started her career exploring her neighborhood on her own. I kept repairing the breaks but she kept making new ones until we finally gave in and got a new fence, but somehow we still kept finding her wandering the neighborhood, mystified that the gate was open. This mystery was solved when I finally caught her in the act of getting up on her hind legs and reaching over to work the latch on the other side of the fence. She only had to see someone work it once or twice to figure out how to start letting herself out. I felt dumb for not anticipating this after seeing how hard she tried to work doorknobs after seeing how they worked, as the only thing stopping her there was a lack of opposable thumbs. When thwarted by us locking the gate, she started using her prodigious teeth, and created a hole in the gate large enough to climb through by chewing through the wood. The only thing that would have been more perfect is if she put a pinup of Rita Hayworth over the hole. She simply had an independent sense of adventure that couldn't be repressed, and went on dozens of such walkabouts over the years, and it's a tribute to her intelligence that she stayed safe while doing so... she was very wary of cars, and would carefully stick to sidewalks whenever possible. I'm altogether convinced she must have had a few adventures over the years we never learned of because she came back and let herself in when she was done.

She was a true Airedale Terrier, feisty as hell, and she was also an alpha-type, something I knew when I got her, though I failed to appreciate the ramifications. The foster children at her breeder's were very informative when asked, explaining that Princess (their name for her) started all the fights among the siblings, and that she won all of them as well. She actually socialized quite well as a younger dog, but she was bitten years ago by a Norwegian Elkhound, after which she grew very wary of other dogs. This lead to a couple of frightening incidents where she picked up smaller dogs in her mouth, which was not appreciated by their owners in spite of her foregoing the ample opportunity to hurt or kill them.

In spite of having been bitten, she readily accepted a new member of the pack when we brought home a standard Poodle puppy named Gunnar. He pestered her constantly, but they became fast friends, and he got away with murder with her; the only things she'd ever scold him about were approaching her food or cramping her style when she was barking at the mailman. That was part of her main job, that mailman bit, as she steadfastly guarded the house. Every day for 13 years if she was home when he arrived Hudson attacked the door with such ferocity that one of the substitute mailmen never got past the point where he'd throw the mail on the porch from a distance. That was fine, since she seemed to consider the mail vermin to be exterminated. We eventually had to tape over the slot in the door because she would grab the letters coming through it and shred them with great fury. But our "regular" mailman knew she actually adored him, and would come over to pet her if he arrived when she was out of the yard, always sharing a few secrets with her. Another one of her special relationships in action.

She never cared much for food, and stayed skinny and athletic her whole life. She loved Frisbee and one silly plastic toy barbell mom gave her, but was indifferent to most other toys. She was quite strong and in her youth she was fast as the wind, and could navigate heavy woods effortlessly at full speed. But she was quirky: she hated her feet being off the ground, so she resisted swimming or even jumping. She was only afraid of one thing in this world: loud noises. She lived in dread fear of thunder, fireworks, and the beeps of the smoke detector. I never could help her much with that, and suffered along with her as she shivered though storms.

She had a deep chest and an extremely loud bark, sounding much larger than her slim frame, which rarely edged above 60 lbs. She had warm tender brown eyes that could melt your heart and canine teeth worthy of a wolf. We let her sport a full Airedale beard her whole life, which made her a mess around the water bowl and a wet kisser. She had a tendency to paint the windows she peered through with snool, a combination of snot and drool for which Airedales are famous. She was seemingly impervious to cold and pain, so it made sense that her mortal enemies were bees, since they stung. She must have eaten a hundred of them over the years, and obviously relished how they fought back. Once a carpenter bee burrowed into the railing on the deck, thinking he was safe there. She proceeded to eat through the wood until she got him. Your plans for dealing with a terrier should never count on your opponent giving up. She was also smart enough to not only to know lots of human words, but to be able to understand sentences in surprising ways. I called her the wonder dog for many reasons.

As I say, she adored children after growing up with those foster kids, and she happily put up with being dressed up for Halloween because it delighted all the trick-or-treaters so much. She was convinced they were here for her rather than the candy, and while that's a stretch, there are probably a couple of dozen kids in the neighborhood who know her name, compared with maybe two of three kids who know mine.

Sorry this turned into a bit of a ramble. I'll just conclude by saying she represented the finest aspects of dog-kind: She was loyal, brave, intelligent, and loving. She was my first dog, and she may not have been perfect, but she was perfect for me, and I will miss her every day for the rest of my life. Thank you so much for letting me share her with you.

Copyright © 1996-2020 Stephen Heaslip. All rights reserved.
All trademarks are properties of their respective owners.